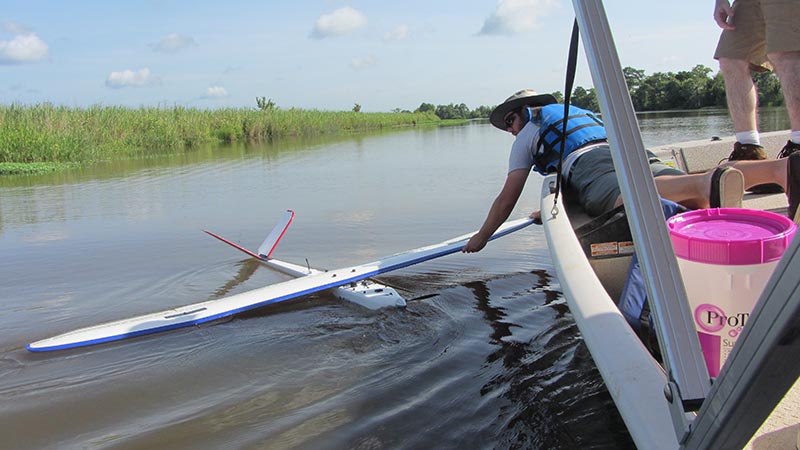 Here is the recovery process for water missions. The Altavian Nova is waterproof, which allows us to travel and work in many locations we would not be able to with other platforms. 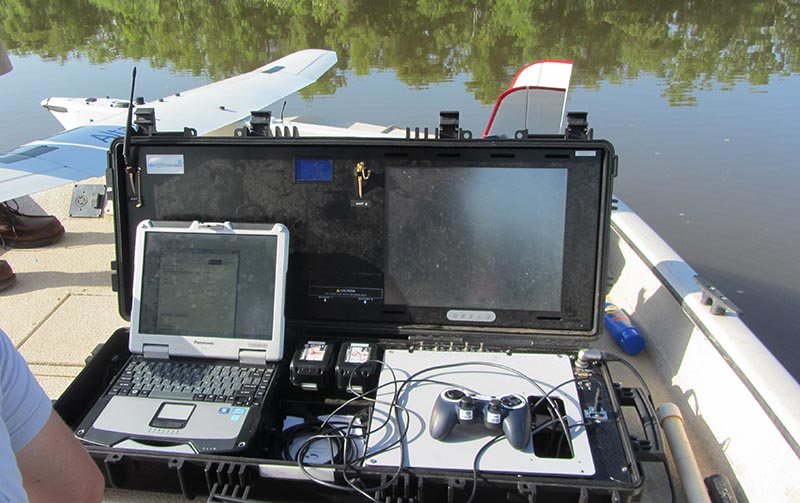 This is the ground control system, featuring a laptop to plan out flight routes for autonomous flight and a remote to provide manual control over the Nova if needed.

March 12, 2014
As most of you that have operated UAS know, there are quite a few choices when it comes to payloads: RGB, CIR, lasers, hyperspectral imagers, the works. Of course, depending on your UAS carrying capacity and energy constraints, you might not be able to utilize the spectrum of imagers available.

This is the current case with our operations. Mississippi State University currently owns two birds: the Altavian Nova, a roughly 11 pound bird that can carry up to 3 pounds, and the Robota Triton, a 3 pound payload that is much more limited.

We currently have three payloads in use for these UAS.

The Nova uses a non-metric payload, which consists of a Canon EOS T2i camera coupled with a Xsens GPS-Aided AHRS for direct georeferencing. The effective resolution is 18 megapixels (5184x3456).

Currently, this camera only captures in the visible spectrum (RGB). Modifications are being investigated, however, to capture blue, green, and near-infrared instead.

The payload is also capable of capturing images at a rate of better than an image per second.

The Triton payload consists of a compact Sony RX100 camera at a resolution of 20 megapixels. It is not currently tied into its own GPS, instead utilizing the same GPS readings as the autopilot system.

The Triton takes images at roughly four seconds per image, although this number may be reduced a bit.

The ADC Lite is used in quite a few small UAS applications. It captures imagery that approximates Landsat bands 2, 3, and 4 (green, red, and near-infrared) at a resolution of 3 megapixels.

Some of the tradeoffs with this camera are the lack of storage (only 2GB maximum) and the imaging frequency. The best mode for storage and data quality is 10-bit DCM, but this limits the imaging frequency to roughly seven seconds. The 10-bit RAW mode is better, but takes up significantly more space, leading to very quickly filling up the Compact Flash card when taking images at the allowable rate of five per second. The last mode, 8-bit RAW, gives better capability to store images, but also reduces the granularity of each pixel's value, from 1024 possible values to only 256 per band.

A rough breakdown of ground sample distance (GSD) per pixel is given in the table below. 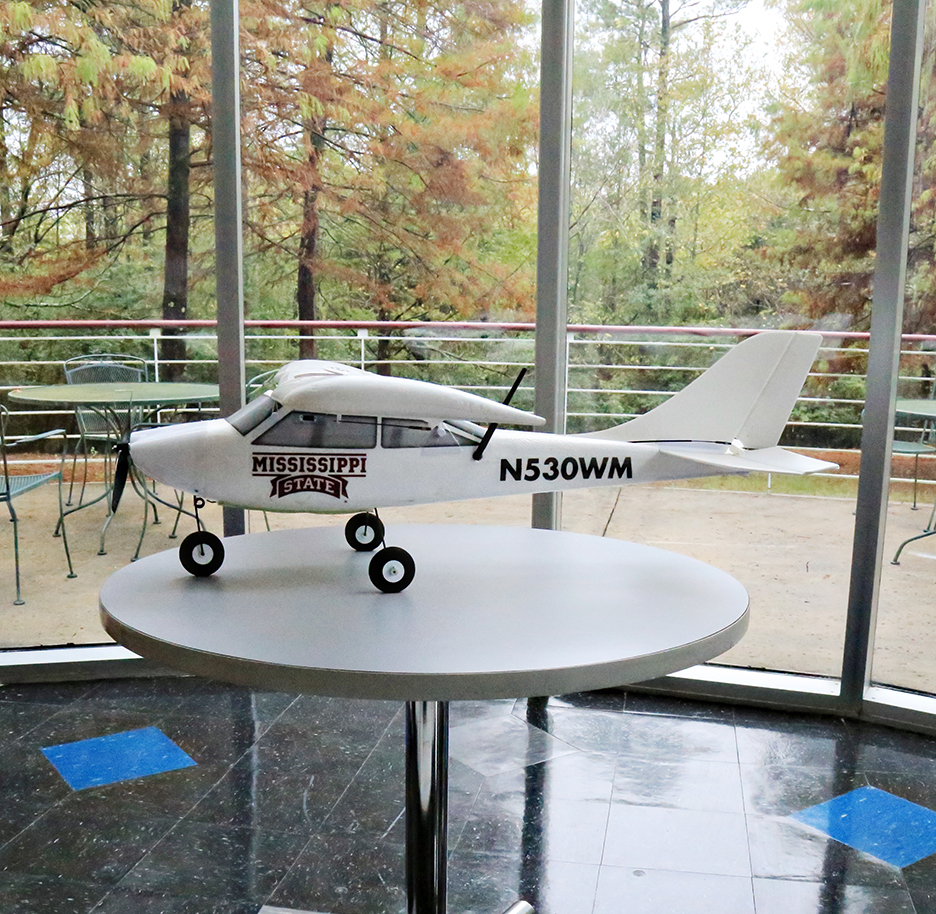 In November 2012 we purchased a Robota Triton, a small aerofoam plane. We purchased two payloads. We bought our Triton to show agricultural and forestry researchers what can be done with small, inexpensive UASs. We have been very impressed with its reliability, durability, ease-of-use, ability to switch payloads easily, stability, and utility. The training, service, and user support have been excellent.

We have used our Triton to date to image cotton and soybeans with both visible and multispectral cameras. We surprised ourselves and a major agroscience company with the ability to see cotton bolls on non-defoliated cotton at 400 ft AGL. With the imagery we captured, a classification algorithm was easily able to count cotton bolls in defoliated fields and show the spatially varying yield that was expected from an experiment. 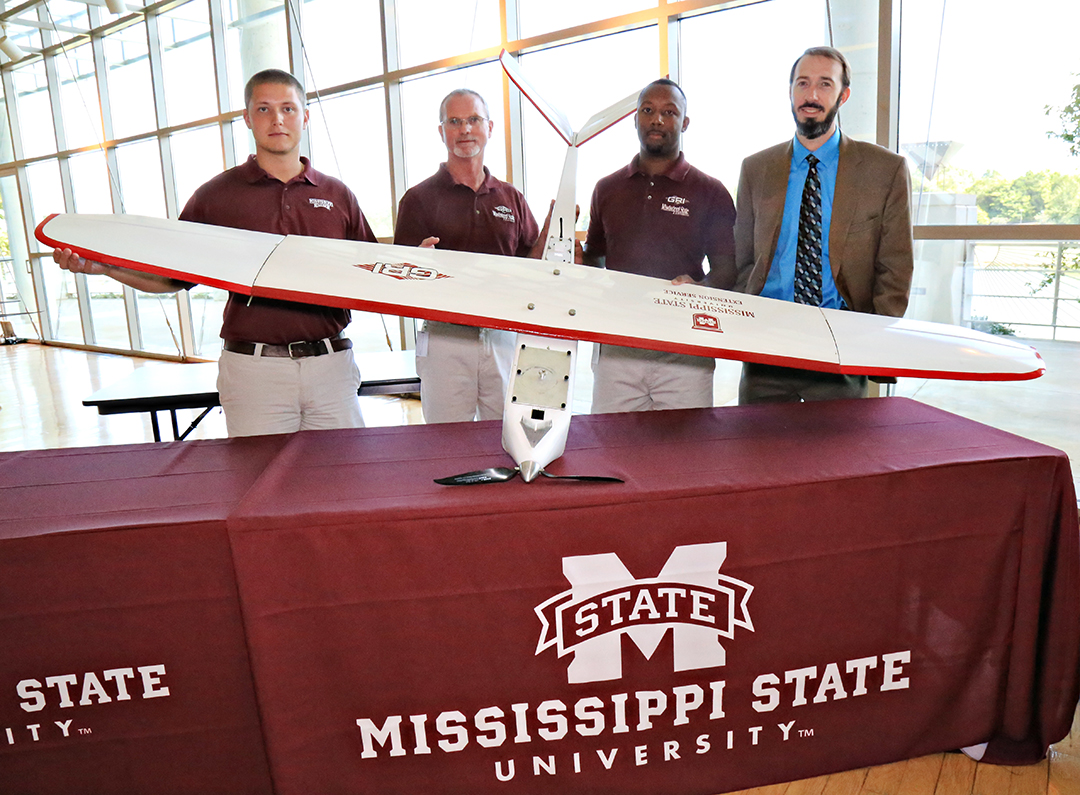 In June 2013, we purchased an Altavian Nova. We have used it for several studies. One particular mission involved imaging river reaches through a swampy area to obtain a more precise measure of the width of the various reaches and the location of standing water, and to obtain a better understanding of the vegetation type and coverage. These data will be used to update parameters in a hydraulic model of the area which is affected by influx from both Gulf of Mexico storms moving inland and river floods moving southward. We launched the Nova from a 19' boat with minimal challenges. We landed the Nova in the water near the boat. The Nova allows the flight team to take off and land in most environments where other UAVs are unable to land.

(UPDATE): In January 2015, we purchased a PrecisionHawk Lancaster MKiii. In September 2015, we started using the PrecisionHawk Lancaster V4. We are looking forward to flying the newest Lancaster because of the newest upgrades to the fuselage, payloads and software. The Lancaster weighs 5.3lbs, and can carry a 2.2lb swappable payload. The PrecisionHawk Team is developing five different payloads for the platform we will be able to utilize. We will currently be flying with an RGB and BGNIR sensor; however, we will be able to interchange with thermal, LiDAR, or hyperspectral payloads should the need arise. The platform will be utilized for crop monitoring, surveying, and stand counts. The ability to attach floats for water takeoffs and landings also opens up possibilities for river and coastal area work in the future. 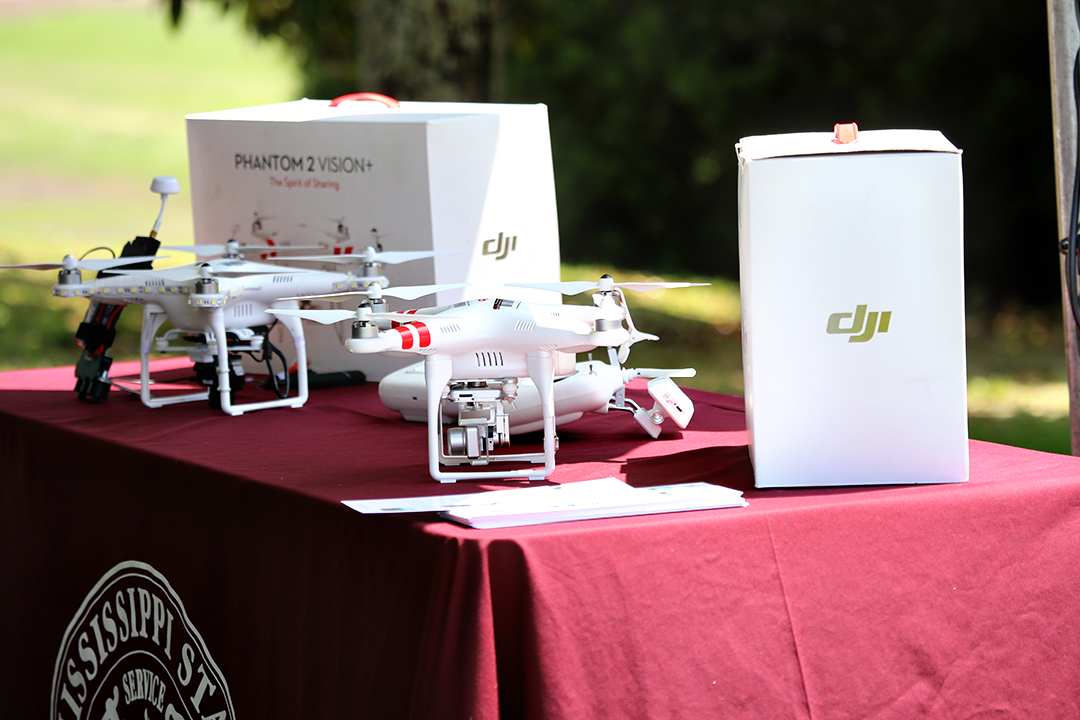 We currently have two DJI quadcopters. The first is a DJI Phantom 2 with a non-gimbaled thermal camera. The second is a DJI Phantom 2 Vision Plus with a gimbaled GoPro-style RGB camera. We are able to quickly set up and launch the platforms to get eyes in the sky for our desired application. We are also able to receive real-time first-person video from the UAS for viewing on an iPhone or iPad. The DJI platforms are available to most everyone and can be purchased at most hobby stores that sell remote control airplanes and vehicles. 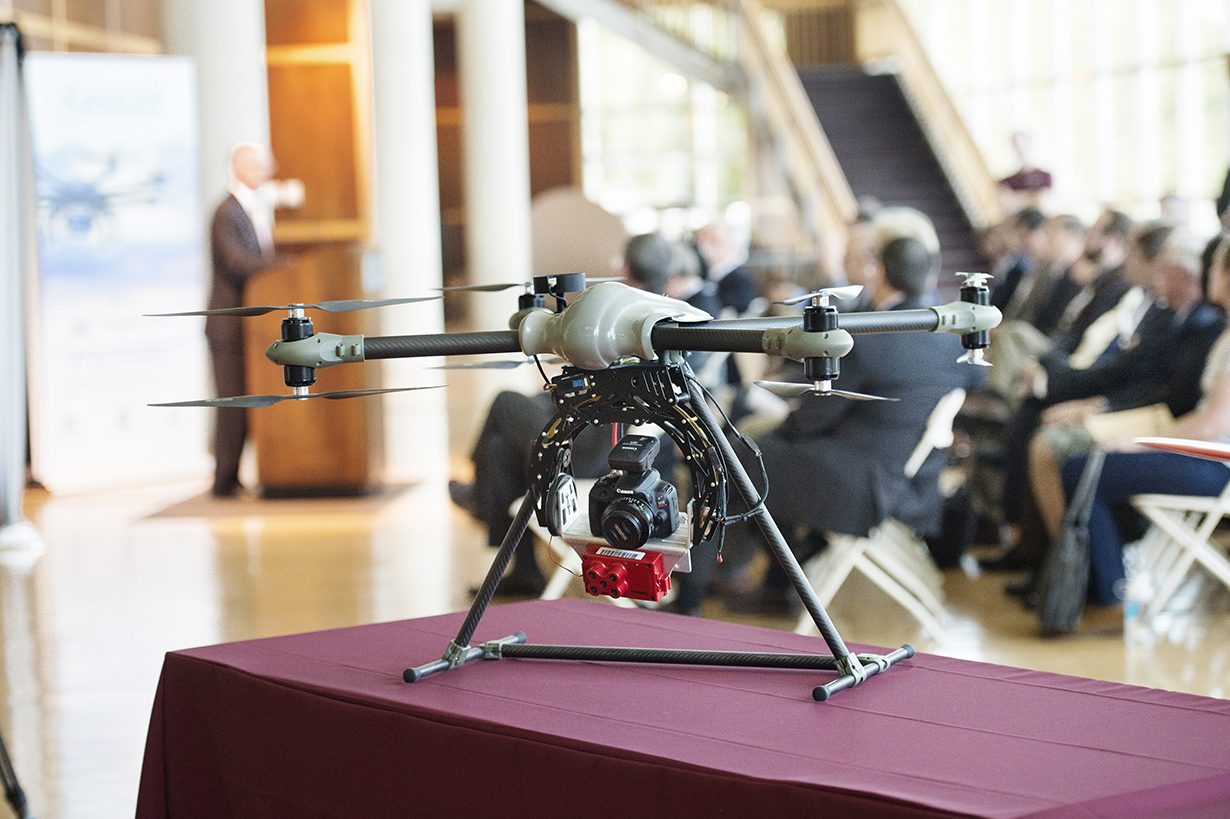 (UPDATE): Our newest UAV in the Mississippi State University fleet is the heavy lift X8 Octocopter. The X8 allows the researchers to fly with 3 different payloads at a time if the need arose. The current payloads for the X8 include the Micasense, Canon RGB, Canon BGNIR and Headwall Hypercube. We are able to take off and land in confined areas where we would not normally be able to get to with a fixed wing UAV.

Our UAS Start and Plans

Building on that designation and the results of those meetings, we have deliberately built our applied UAS program, focusing on the efficiency and economy of using small UASs (sUASs) for dull, dirty, and dangerous place-based applications. In October 2011, we started an initiative with the NOAA UAS Program Office and the NOAA National Weather Service (NWS) River Forecast Centers (RFCs) with the goal of integrating UASs into their work flow.

In February 2012, the NOAA UAS Program Office and NGI hosted a workshop at a NOAA facility in Boulder, Colorado for the purpose of bringing together representatives of the RFCs and representatives of vendors or operators of UAS platforms, sensors, and service providers. The workshop was a step towards integrating UASs into the workflow for the RFCs. The workshop report summarizes the two days of presentations and discussions. Appendix A contains four tables: the workshop agenda, the workshop attendees, the RFC requirements that UAS could potentially address, and the UAS sensor resolutions needed for the RFC requirements. Appendix B identifies the lessons learned to date by multiple agencies, as well as their concerns and best practices. Information on the results of some test flights will be discussed in a later blog posting.

The Geosystems Research Institute (GRI) started working with agricultural researchers in the summer of 2013 to ascertain the advantages of using sUASs for precision agriculture. To date we have collected imagery of a cotton field at 1 inch resolution to show the effect of herbicide drift. We are working on issues such as green up (weed competition, loss of crop due to freeze or severe weather, etc.) which is enabled by the sUAS technology, new NDVI formulas based on new camera sensor technology, and operational procedures for economical use of sUASs in production farming (sUAS durability, process repeatability, FAA policy, interaction with other agricultural machinery, etc.)