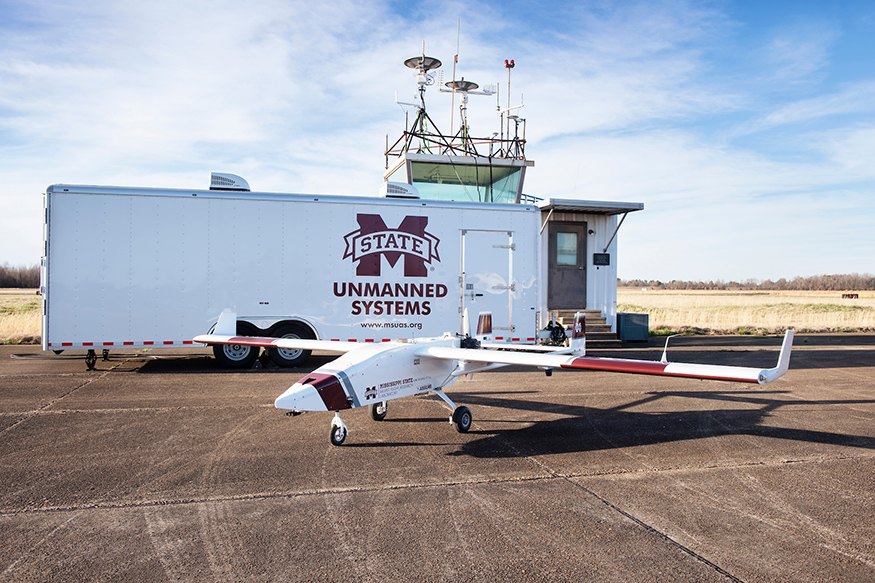 According to Raspet Lab Director Dallas Brooks, these UAS will “allow our team to carry more equipment, fly at higher altitudes and for a longer period of time, which increases our ability to meet the needs of our federal research partners, as well as to directly support Mississippians in times of emergency.”

“Our previous aircraft were good for three to four hours in the air of uninterrupted flight,” Brooks said. “These TigerSharks are capable of sustained flight for 8-12 hours without refueling. When we’re doing work like disaster relief support, those hours become critical. Every minute in the air is a minute you might be able to find someone that needs medical assistance or evacuation."

“Having aerial imagery over a scene is absolutely invaluable to the first responder community. So we are always prepared to support in 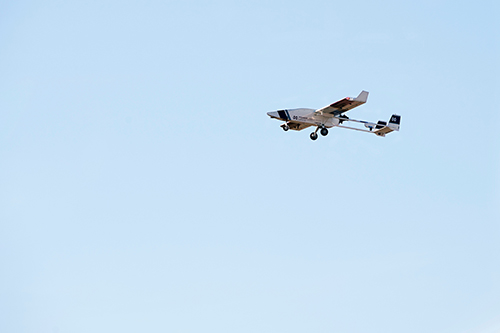 The TigerShark flies through the air at the Greenwood-Leflore County Airport, which has hosted MSU’s acceptance flights for the aircraft.
Photo by Beth Wynn
times like this. These new aircraft allow us do so much more to support these and a host of other public service operations,” he said.

The TigerShark can carry nearly 100 pounds of payload, or equipment, almost tripling Raspet’s capacity to carry specialized devices such as sophisticated sensors that can, for example, examine agricultural crop health or the status of critical infrastructure such as bridges and levees. The added capacity also allows the aircraft to carry multiple pieces of equipment at the same time, dramatically increasing the effectiveness of each flight. Brooks said his team now can use one UAS to monitor erosion and, at the same time, test the ability of a UAS to orbit over a disaster area and function as a temporary cell tower.

Raspet pilots have spent weeks training on the new UAS, which weighs approximately 500 pounds. Although it is unmanned, the TigerShark is equipped like traditional aircraft with radios, transponders and lighting. Like all of Raspet’s manned and unmanned aircraft, the TigerShark fully complies with Federal Aviation Administration guidelines when flying.

“We’re very fortunate to have fantastic partners across the state where we can fly our unmanned aircraft in support of that region’s needs,” Brooks said. “A great example of that is the Greenwood-Leflore County Airport, which has hosted our acceptance flights for the TigerShark. We could not ask for a more welcoming facility, stronger community support or higher quality air traffic services. They have been stellar throughout this acceptance period, and we very much look forward to the next chapter in working with them.”

Raspet has established relationships with the Federal Emergency Management Agency and the Mississippi Emergency Management Agency to study the best ways to integrate UAS in disaster response scenarios. The research center is also establishing relationships with local governments in the Mississippi Delta to support their civic and public safety functions, in addition to the agricultural and environmental work Raspet does in the region.

“Our partnership with MSU’s Geosystems Research Institute supports UAS-based research that monitors crop health, monitors trends and looks at broad areas of crop distress and potential causes,” Brooks said. “It can also look at changes to the environment, things like beach erosion and infestation of invasive species. So much that we do here is focused on the core needs of Mississippi and that is where we are at our best. We tend to be very application-focused here at Raspet Flight Research Laboratory.”

Founded in 1948, Raspet Flight Research Laboratory is a nationally recognized leader in the field of experimental aviation research. For more, visit www.raspet.msstate.edu.