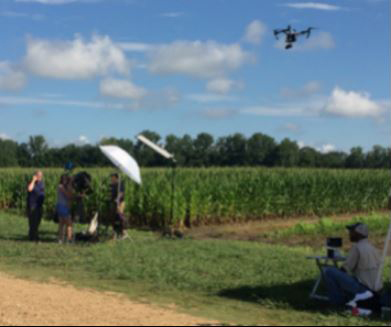 ASSURE is a group of 23 universities in the U.S., United Kingdom and Israel dedicated to providing the Federal Aviation Administration research to quickly, safely and efficiently integrate unmanned aerial systems with minimal changes to the current National Airspace System.

ASSURE is managed by MSU.

"MSU has taken a leadership role, and it's got to be recognized," said ASSURE Deputy Director Steve "Lux" Luxion. "When Fox News comes to do a story about the progress, it's a win."

"Increasingly, people are beginning to figure out that drones can do many things more efficiently and safely," Luxion said.

Luxion said as more UAS' take to the air, the need for the FAA to allow drones to do their jobs without making the skies more dangerous for manned aircraft would become more important. He said UAS' are currently only allowed to be within the pilot's line of sight, but as technology and regulations changed, they would be able to work much further away and in more applications.

Luxion said the jobs done by manned aircraft that were candidates for drones included those that were dull, dangerous and dirty, such as agricultural and coastline surveying, power line inspections and applications involving firefighting and hazardous material.

In April, it was announced MSU would be selected to lead the Department of Homeland Security's UAS test site to provide facilities, expertise, testing and training for DHS agencies.

Luxion added that the national coverage could also serve to promote MSU's programs to students interested in working with drones.