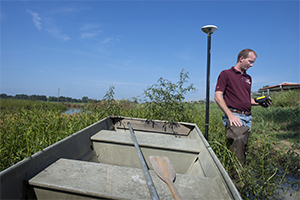 Gray Turnage
Invasive Species Expert
GeoSystems Research and Northern Gulf Institute Mississippi State University
Gray Turnage is looking forward to the day when he no longer has to trudge through mud to do coastal wetland research. Turnage is an invasive species expert with

Turnage is an invasive species expert with Mississippi State University and was recently part of a team that used a drone to map a species of wetland plant. The drone allowed researchers to get better images than from a satellite, cut down on the cost of plotting the plants by hand and spend less time in the mud.

"For me, I think it gives us as resource managers a new tool to do our jobs," Turnage said. "If I never have to hike into a marsh again that would be nice."

The Mississippi State research team programmed a drone carrying a digital SLR camera to fly over the lower Pearl River basin, near the border of Mississippi and Louisiana. As the camera took pictures, the drone tracked the latitude, longitude and altitude at which each picture was taken.

Sathish Samiappan, a Mississippi State Geosystems Research Institute postdoctoral associate, wrote software to tell a computer system the color, texture and shape of a species of wetland plant. The system was then able to locate the plant within the images. The team stitched those images together to create a map showing where the plant was growing within the delta.

Traditionally, researchers have mapped wetland plants using satellite imagery, by using photos taken from a plane or by walking though marshland with a GPS. But satellite imagery typically has low resolution, making it difficult for researchers to identify plants. Satellites may only orbit over a given location once every two months, making it hard to track changes in the landscape.

While images taken from a plane have better resolution than from a satellite, hiring a pilot and plane is costly. Walking an area with a GPS also has its disadvantages. It's time intensive and can expose researchers to dangers, such as insect-borne diseases.

A drone, on the other hand, is less time intensive, more affordable and safer for researchers -- even as they have to keep the drone within eyesight. "Being able to sit offshore with a boat is a very comforting thought," Turnage said. 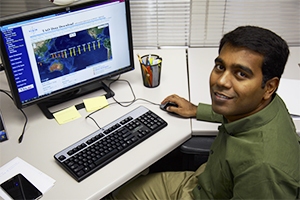 Sathish Samiappan
Unmanned Aerial Systems Imagery Software Expert
Geosystems and Northern Gulf Institute
Mississippi State University
Using a drone for coastal wetland research has implications beyond the MSU team's project. The plant the MSU team mapped is a variety of phragmites australis, or roseau cane. Recently, swaths of roseau cane at the mouth of the Mississippi River have been devastated by an invasive insect from Asia. Using a drone and similar software, researchers could track the loss of the plant overtime, Samiappan said.

The limitations don't end with roseau cane. The MSU team is also using the method to track agricultural damage caused by feral hogs.
"You could use it on any plant as long as you can see it from the sky," Turnage said. "All you need is the appropriate amount of training data."

By Sara Sneath, NOLA.com | The Times-Picayune