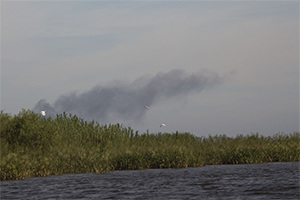 Phragmites australis growing throughout the delta of the Lower Pearl River. The invasive plant blocks out native salt marsh vegetation and is a fire hazard.
Photo: Geosystems Research Institute
Unmanned Aerial Systems pilots,
Sean Meacham and David Young
A team of researchers, unmanned aerial vehicle pilots, biologists and student workers from Mississippi State University have identified a tall, grass species that has invaded coastal areas along the Gulf of Mexico.

The Mississippi State team's original goal was to collect hydrologic data for a project funded by the National Oceanic and Atmospheric Administration. (NOAA). Through their funding, the MSU team conducted the SHOUT4Rivers project– Sensing Hazards with Operational Unmanned Aircraft Systems (UAS) Technology for Rivers. This project focused on mapping the delta of the Lower Pearl River so river forecasters would know where water was moving in the event of a flood.

Phragmites can be a danger to both humans and native wildlife, according to Turnage. For humans, the height of the plant (usually around 16ft) can make navigating small rivers very difficult because it lowers overall visibility and may prevent people from recognizing landmarks and potential dangers in their path. It also affects how sound travels in an area which can contribute to someone becoming disoriented.

This strain of Phragmites also outcompetes native plants for resources and grows very densely. The dense groupings and rapid expansion blocks out native salt marsh vegetation and provides little or no food or shelter for most saltmarsh-dependent wildlife. If this occurs over a large enough area, it can lead to some species becoming threatened or endangered. Accurately identifying the areas where Phragmites grow can help local resource managers from, but not limited to, the St. Tammany Parish, local United States Forestry and Wildlife Services offices (USFWS), and the State of Louisiana reclaim affected areas.

To best identify the plant species, the Mississippi State teams used UAS to take several multispectral images of various areas of a location. Sathish Samiappan, a postdoctoral associate at the Geosystems Research Institute who handles software development for image analysis, explains that UAS usage is superior to satellite imagery and manned flight in several ways. While satellite imaging can cover a larger area in one image, the images are much less precise. Though manned-flight images are taken closer to the ground and cover a large area, researchers must pay the cost of a pilot, and the overall process can be too time-consuming. When using UAS technology, the image area is much smaller, but the images are more precise, the process costs less money, and it takes much less time.

Samiappan explains there are drawbacks to using UAS imaging. Though the hardware of UAS and sensors are sufficient for the job, the commercially available computer software used to analyze the images are unable to distinguish between certain features within the picture automatically.

Samiappan offers a human comparison to explain the problem, "…we differentiate the objects in an image by their color, texture, shape and etcetera. These are called features of an image. Computer software cannot make these distinctions, and so we have to write software to train them to recognize the image in much the same way we do."

To solve this issue, Samiappan uses a process called supervised classification to "teach" the computer how to differentiate objects in the images. Features of different objects (Phragmites, trees, water and roads in this case) are extracted from the image in the first step. A different computer algorithm builds a mathematical model of each object. These models are then programmed into the software. Once the software is updated, the computer is then capable of differentiating objects within images.

Both Turnage and Samiappan believe the improved imaging software can be applied to many different situations. With their work on the Gulf project nearly wrapped up, both men venture into new areas to test the applicative limits of the new process.