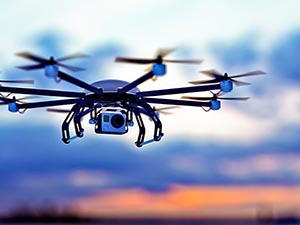 With the proliferation of low-cost unmanned aerial vehicles, sporting events around the country -- including Division I football games -- are seeing an increase in the number of drones hovering over stadiums and tailgating areas. Reports of accidents involving UAVs are on the rise, including an incident on opening weekend at Commonwealth Stadium on the campus of the University of Kentucky during a football game.

According to Mississippi State's chief research officer, Mississippi State University does not allow the operation of UAVs in the core campus at any time without specific permission of the university and the Federal Aviation Administration. Operators flying UAVs in restricted airspace are breaking the law and pose a potential risk to everyone on the ground.

"The Federal Aviation Administration has very specific rules about where unmanned aircraft may and may not fly," said David Shaw, the university's vice president for research and economic development and an authority on UAV policy.

According to an FAA special security notice, the airspace above Davis Wade Stadium and other such venues are classified as "national defense airspace" on game days. The restriction extends three miles around and 3,000 feet above the stadium.

"Commercial and non-commercial unmanned aircraft of any size are not allowed to fly above our campus without airspace and TSA security authorization waivers, and they must also adhere to other applicable federal regulations," he said.

The notice states: Any person who knowingly or willfully violates the rules pertaining to operations in this airspace may be subject to certain criminal penalties under 49 U.S. Code 46307.

"Flying any aircraft over crowds at a low altitude poses risk and is ill-advised," Shaw said. "Unfortunately, universities and colleges around the country are seeing problems with unauthorized drones this season," he said.

Additionally, the FAA has two other policies that regulate operation of unmanned aircraft, Shaw noted.

All commercial activities must have an approved certificate of operation, which has stringent requirements.

Amateur or hobbyist operations are also regulated specifically, and require that they be operated in "unpopulated areas." As a result, Mississippi State has developed a university policy prohibiting any outdoor operation of unmanned aerial systems except when specifically authorized by the university.